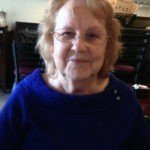 Annie Jo Smith Cain, passed away on November 17, 2018, at the age of 95.  She was born in Newberry, Florida, on March 29, 1923 to Joseph Duncan and Cora Lee Smith. She was the eighth of nine children, all of whom have preceded her in death. On June 17, 1941 she married Julian Wilson Cain, who passed away in 1991 after 50 years of marriage. During her marriage, she worked at her father’s grocery store, Smith’s Grocery, on Main Street in Alachua, Florida, and was a bookkeeper for her family’s farm and other businesses, including Cain Tire and Fuel.

She had six children: Charles Wilson Cain (Pat), Catherine Marie Cain Lyons, Wallace Ray Cain (Mary), Larry Cain (deceased), Deidra “DeeDee” Cain Smith (Rod), Julian Alan Cain (Regina). Her children remember her as the most loving and wonderful mother, but her greatest source of joy was being a grandmother, lovingly known as “Nan,” to her sixteen grandchildren:  Charles Cain, Jr., Angela Jackson, Jeffrey Cain, Teresa Cain, Jason Cain, Matthew Cain, David Barber, Jr., Julie Dee Barber (deceased), Kelly Barber, Christy Cain, Wallace Cain, Jr., Alison Glover, Jesse Smith, Dylan Smith, Caleb Cain, Wesley Cain. By the end of her life, she had gained an additional 23 Great-Grandchildren and 5 Great-Great-Grandchildren, all of whom were a great source of pride and enjoyment for her. Her nieces, nephews, extended family members, and friends were as precious to her as she was to them. She was an active member of the High Springs Church of God throughout her entire life, where her services will be held.