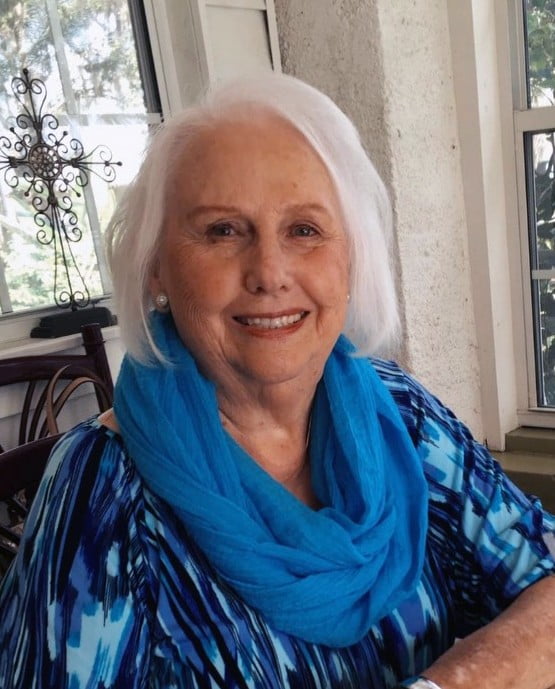 Barbara Geraldine Hutson, 88, of Alachua, Florida, went to be with her Savior on December 10, 2022 after a long struggle with congestive heart failure and MDS, a bone marrow disease.

“Gerri” was born on August 22, 1934 to Daisy and William Kay Crawford in Scottdale, Georgia. A very good student, Gerri graduated from Avondale High School in 1951 and was able to skip the 11th grade.

In 1950, she met the two most important people she would ever know. At a revival meeting in her hometown, at the age of 16, Gerri met Jesus and gave her life to Him. She always said that was the greatest decision that she ever made. That second most important person she met that year was Curtis Hutson at Avondale High School. They began dating after high school graduation and married on November 21, 1952. The Lord blessed their marriage and gave them 4 loving children; Sherry, Donna, Tony and Kay.

When they were first married, Gerri worked at Frigidaire and the Tax Office in Decatur, Georgia. In 1956, their lives were forever changed, as Curtis resigned his USPS postman job and became the pastor of Forrest Hills Baptist Church in Scottdale, Georgia.  While serving at Forrest Hills from 1956-1977, Gerri experienced what she described as the happiest years of her life. She loved being a Pastor’s wife; visiting people, teaching Sunday School and singing in the choir. She was so proud to be the wife of Dr. Curtis Hutson, and you didn’t have to be around her very long to know that.

In 1977 Curtis resigned FHBC and began traveling and speaking in evangelistic meetings. With Tony and Kay still at home she was the solid base and homemaker as he traveled. She would tell you that she missed him, but realized he had to do what God had called him to do. In 1979 they moved to Murfreesboro, Tennessee. There she attended and supported the planting of Middle Tennessee Baptist Church, where her son, Tony, was now her pastor. She loved being a member, singing in the choir and teaching a young girl’s Sunday School class. She was a member of her son’s church until her health began to decline. In October of 2017, she moved to Alachua, Florida where Kay, her youngest daughter, faithfully and lovingly cared for her at their home. She was active enough to visit Donna in Orlando for a few days each month. After a bout with COVID and further decline in her health, she moved into an assisted living facility nearby. She really loved her beautiful room and the friends she met there.

Gerri was so much fun to be around. You never had to guess what she was thinking, because she always told you. One didn’t have to be around her long before she had you laughing, always an entertainer. She had the gift of hospitality and always opened her home and table to others. Her cooking was phenomenal and the love she put into it was so evident. Gerri was a caregiver for many years, as she not only cared for her family and so closely took care of Curtis as he fought cancer, but she also was a selfless caregiver for her father, who lived with them for almost 20 years. If you knew Gerri, you knew that two of her favorite things to do were to play rummy and to eat cake. And she loved them both even more when she was doing those things with those she loved the most. Some of her favorite partners to play and eat with were her grandkids and great grandkids, who equally loved those special times together with Grandmother. She will be so missed, but our hearts rejoice that we will see her again one day in heaven!

There will be a funeral for Barbara Geraldine Hutson on Monday, December 19, 2022, at Corinth Baptist Church at 3156 Langley Road SW, Loganville, GA. There will be a time of visitation with the family from 11:00 AM until 1:00 PM at the church with the funeral service to follow. The service will be followed with an internment at Eternal Hills Memorial Garden at 3700 Stone Mountain Highway, Snellville, GA 30039.