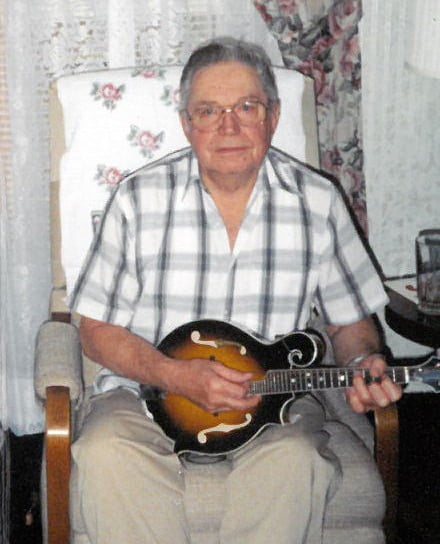 Bill was born in Tazewell, Virginia on February 21, 1923 to Isaac and Clara Mae (Johnson) Hess.  Bill was married to Mable Kathleen (Waddell) for 78 years.

Bill moved his family from Virginia to Florida in 1956.  He worked as a carpenter for Gonzalez & Sons in Alachua, Florida for many years before being employed by J. M. Rogers Construction where he worked as an assistant superintendent traveling the country until he retired.  He enjoyed woodworking, fishing, turkey hunting, gardening, and Mable’s fine country cooking.  He enjoyed traveling to the Blue Ridge Mountains and listening to and playing Bluegrass music with Bill Monroe as his role model.

He enlisted into the Army/Air Force in 1943 where he served as an airplane and engine mechanic.  A World War II veteran who received the American Theatre of Operations Medal, Good Conduct Medal and WWII Victory Medal.  He was a member of the Mt. Horeb Baptist Church where he attended until becoming disabled.

Bill was beloved by many within the community along with a vast amount of family members who called him “Tiger”.  He will be truly missed by his family who believe he enjoyed a Thanksgiving feast in heaven with all his loved ones that have passed.

The funeral service will be held at noon on Thursday, December 1, 2022 at Mt. Horeb Baptist Church, 3449 NE Co Road 340, High Springs, FL (Gilchrist County) with visitation starting at 11:00 am.  Burial will follow immediately after the funeral at the church cemetery.