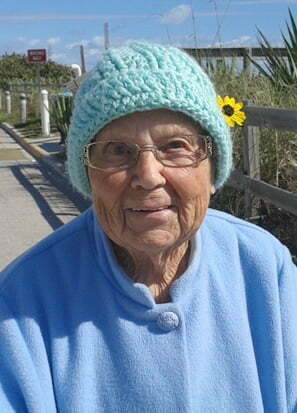 Carolyn’s parents emigrated from Czechoslovakia and settled in Burgettstown, Pennsylvania. She was born in 1919 and is the youngest of nine siblings.  In the 1950’s, Carolyn followed her sister to Miami, Florida where she met and married her husband.

She loved to play the piano at home for her children.  She could not read music but has an ear and could play songs after hearing it only a few times. Man could she bang out the song “Delta Dawn”. Once the last child was established in elementary school, she took a job at the local hospital where she was a switchboard operator and then admitting clerk.  When all the children had moved out of the house she and her husband relocated to Sebring. She found part time work at the local hospital for many years. For her 80th birthday she decided she would quit working and finally retire. To keep her mind busy, she began to crochet. She crocheted many colorful blankets.

After her husband passed Carolyn relocated to High Springs to live with her son Patrick. She adjusted well as many of her children were in the area. There was a local music store in town, and she decided she wanted to take violin lessons. Her goal was to learn only one song, ‘Ave Maria’. She would practice and make everyone who came to visit listen to her.

She attended Mass daily. For many years she played the organ during Adoration until her memory started to slowly fail and she was struggling to remember the songs. When she could no longer drive, she would find volunteers to drive her to the church. In her nineties it became obvious she needed more assistance. By the grace of God, her son John and daughter in-law Joan moved her into their home where she was well cared for.

Amazing that she would be celebrating her 103rd birthday, which she did at the Brevard Alzheimer’s day care known as Joe’s Club. The Mayor of Melbourne was there and awarded her with a certificate of Carolyn Connelly day!! Quite a milestone for her! She would get picked up and dropped off daily. Such a wonderful organization and she just loved going there. She will be missed by all who came to know and loved her.

A Mass will be held on January 6th, 2023 at 11 AM at St. Madeleine Catholic Church in High Springs, Florida. She will be laid to rest in the St. Madeleine Memorial Garden alongside her husband, John and her son, Shawn. A celebration of her life will follow her Mass in the church hall.

In lieu of flowers, please feel free to donate to your favorite charity.