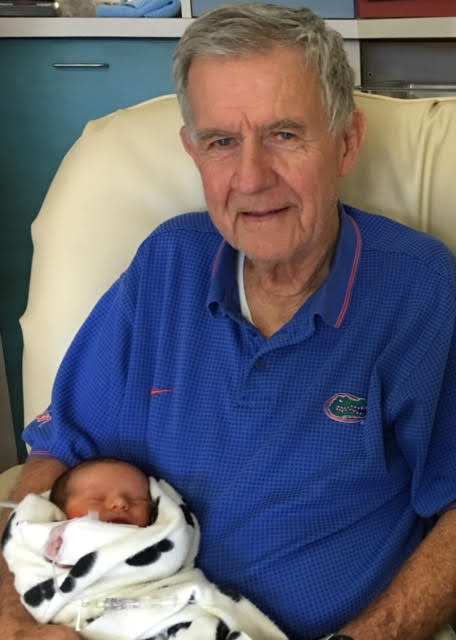 Elmo Benjamin Whitty of Gainesville, Florida passed away on Friday, July 31st, 2020 at the age of 83.  Ben died peacefully with his beloved wife Mary Ann and their children by his side.

Ben was born in Lee, Florida, on March 6, 1937 to John Butler and Edith Allen Whitty.  Ben was the youngest of six children.

Dr. Whitty began his professional career as a faculty member in the Agronomy Department, Institute of Food and Agricultural Sciences, at the University of Florida (UF).  He spent his entire career at UF as he progressed through the ranks of Assistant, Associate and Full Professor. Dr. Whitty’s primary responsibilities at UF were in research and extension work with various agronomic crop species. He used his expertise and outstanding skills to contribute greatly to our knowledge of the production and management of numerous crops but with primary focus on peanut and tobacco. The results of Dr. Whitty’s research program were published in numerous scientific journals and shared through presentations given at numerous scientific professional meetings. He was best known for his excellence in extension programming where he worked closely with other Extension Specialists from UF and especially with UF County Extension Faculty across the State of Florida. He travelled to all reaches of the State visiting with individuals and  organizing meetings for crop producers, agricultural industry groups and County Extension Agents. Dr. Whitty was well known and respected in agricultural circles. He frequently visited farms across Florida to diagnose crop production problems and provide advice for solving crop production problems. Dr. Whitty’s knowledge and skills were widely valued by crop producers, agricultural industry personnel and many others.  He was greatly respected and admired by other Extension Specialists, County Extension faculty and his peers in the Agronomy Department.  He published many extension publications addressing all facets of crop management and production.

Aside from Dr. Whitty’s vast technical knowledge, he had a warm personality that resulted in outstanding interactions with many individuals and agricultural groups.  Dr. Whitty was an active member of several scientific societies including the American Peanut Research and Education Society where he served on various committees and as President of the society in 2004.  The respect and admiration of his peers was evident in the many local, state, and national awards and recognitions that Dr. Whitty received during his career. Following a very successful career, Dr. Whitty retired from UF on June 1, 2005. As a result of his excellence as a faculty member, at the time of his retirement he was awarded the status of Emeritus Professor.

Ben enlisted in the Army on October 12th, 1964.  During his service, he was awarded the Vietnam Service Medal and the National Defense Service Medal.  He was promoted to Captain on June 7, 1966.  Ben served his country faithfully until July 14, 1966.

Ben was preceded in death by his parents and by his sisters Lucile Cherry, Muriel Turlington, Frances Mercer, and his brother Bob Whitty.  He is survived by his wife Mary Ann Whitty; children Kyle Butler Whitty and Ross Nicolaus Whitty (Megan); grandchildren Teagan Elizabeth and Knox Benjamin; and sister Gertrude Gamble.

A visitation for Ben is planned for Tuesday, August 4th, 2020, from 10 AM to 11 AM at Saint Madeline’s Catholic Church at 17155 NW US Highway 441 in High Springs, Florida.  All are invited to attend. The funeral will follow immediately at 11AM.

In lieu of flowers, the family is asking for donations to the the Alzheimer’s Association and Saint Jude’s Children Hospital.