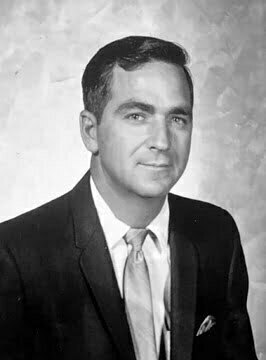 Joseph “Gerald” Cain, 88, of High Springs, FL went to be with his Heavenly Father on Tuesday, January 11, 2022. At the time of his passing, he was lovingly surrounded by his daughters, sons-in-law, grandchildren and several of his great grandchildren. Gerald was born November 17, 1933 in Branford, FL to Henrietta “Nettie” and Joseph Cain. Their family moved to Alachua shortly thereafter where he was raised on their family farm. He grew up surrounded by his large extended family whom he greatly loved. Gerald graduated from Alachua High School in 1952 and he remained close to his graduating class throughout his life. After high school, he enlisted in the United States Army during the Korean Conflict and was stationed in Germany.

After returning home, he enrolled in and graduated from the School of Pharmacy at the University of Florida in 1962. He married Jeanette “Jenny” Thomas on August 17, 1958. Upon graduating they moved to Satellite Beach, FL where he worked for Mr. Jack Eckerd in the original Eckerd’s Drug Store. He then purchased his father-in-law’s (J.W. Thomas) drug store in 1966 in High Springs, FL and opened Rimes and Cain Drugs with Gordon Rimes, which later became Cain Drugs. Gerald was ever the entrepreneur and had numerous business ventures over the years including farming, an auto parts store, a fast-food restaurant, a pig farm, a chicken farm, real estate, and day traded in the stock market as a “hobby”.

Gerald faithfully served, in many capacities, at First Baptist Church of High Springs including singing in the church choir, being a deacon, going on mission trips and teaching Sunday School to name a few. He always enjoyed spending time with his family, playing golf, Gator Football, bird hunting, reading, spending time at Horseshoe Beach, and making memories with friends and family.

Funeral services will be held at 2:00PM Monday, January 17 at First Baptist Church of High Springs, 20112 US-441, High Springs, visitation will precede the service at 1PM at the church. The Graveside Service will immediately follow at High Springs Cemetery. Dr. Ron Huggins will be officiating.

In lieu of flowers memorial donations can be made to First Baptist Church of High Springs, Together By Faith, building fund. Onrealm.org/fbchighsprings/give or text 73256 to donate. For those of you who would like to attend, but are unable to do so, you can watch the livestream on fbchighsprings.org.