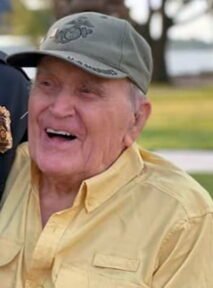 Leonard “Leo” Leroy Arnold, 90, of Leesburg Florida, passed away on Saturday, July 23rd, 2022. Leo was born in Champion, Ohio on August 6th, 1931 to Forest and Florence (Rice) Arnold. He was married to his beloved wife, Luella King.

Leo worked as a pressman in printing. He and his wife, Luella, also operated the Riverside Press and Bait & Tackle business in High Springs for over 12 years, 1970’s into the early 1980’s.

He enjoyed being outdoors, stockcar racing, baseball, gameshows, and spending time with his family.

He is preceded in death by his wife, Luella Arnold; his daughter, Leona Beckelheimer; his son, Brian Arnold; his parents, and his siblings.

In lieu of flowers, memorial donations may be sent to the family to help cover the cost of the memorial.

A graveside service will be held at 11 AM on Friday, September 2nd at the High Springs Cemetery, 23998 NW 192nd Avenue, High Springs, Florida.