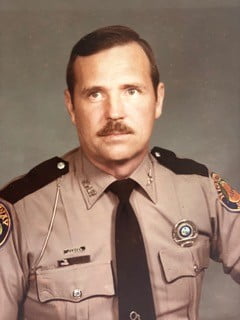 Retired FHP Lt. Robert E. Lucas went to chase down law breakers on the other side June 8, 2020.

While most people do not care to be defined by their careers, Bob Lucas was different. He took great pride in being a Trooper and all that came with it. For years he patrolled Highway 19 and enjoyed giving “presents” to the speeders – his way of keeping the area safe and keeping someone else’s family alive. He hated the fatalities so much that he went to school to become the area Homicide Detective and an Accident Reconstructionist. This way he could give families a peace of mind in knowing exactly what happened and put the responsible drivers where they belonged.

While his work consumed the majority of his life, he found time to do the things he loved – fish in the Florida Keys, tinker with his tractor, create beautiful stained glass art, build his retirement home from the ground up, and help the love of his life Mary show her basset hounds. He didn’t much enjoy the showing of the dogs but his love for her got him into the show ring! He was an avid NASCAR fan and will finally be able to shake Dale Earnhardt’s hand in Heaven, which I am sure he was looking forward to. He was also an avid watcher of “The Curse of Oak Island” and will make it a point to get to the bottom of that mystery shortly after reconnecting with his parent,s Peter & Esther Lucas. Then I’m sure he will be off to have a cup of coffee with his long time friend Frank.

True to his character of being different than most, Bob was recently diagnosed with a rare form of cancer called Spindle Cell. His time of decline was fast (2 months) but it allowed him the chance to prepare for his departure and ensure his love was taken care of.

Bob belonged to FAST (Florida Association of State Troopers) and for many years supported The Broken Spoke until he didn’t realize his dues had lapsed. He was also a Veteran of the United States Army where he was awarded medals for Good Conduct and Sharpshooter.

The family would like to thank Haven Hospice for their continued support and guidance during this difficult time.

There will be a short visitation and viewing at Bethlehem Lutheran Church in Ellisville, FL at 10:00 a.m. on Friday, June 12, 2020 followed by a graveside service.